After winning Best Bistro in the Georgia Straight 2013 Best of Vancouver Reader's Choice awards, Eater sat down with Chef Marc-Andres Choquette, executive chef at Tableau Bar Bistro and Homer St. Cafe to talk about whether cooking classic French cuisine is restrictive and whether Vancouver can handle serious French cooking.

I always wonder whether there's a restrictive nature to creating classic French dishes or do you like the idea that you're trying to find the perfect interpretation and delivery of a dish?
I think it goes with the individual chef and training that they've had, the people that you've worked with in the past who were your mentors. I did my training in Montreal with ex-French-from-France chefs - so my training was done in a classic way. However we also took into consideration what was current, this was in the early 90s when the food scene was coming up very strong, we'd look to New York, Paris. I went to Rouen in Normandy to do a stage for four months at a Michelin-starred restaurant, I was always curious about French food and fine dining so I was very happy. 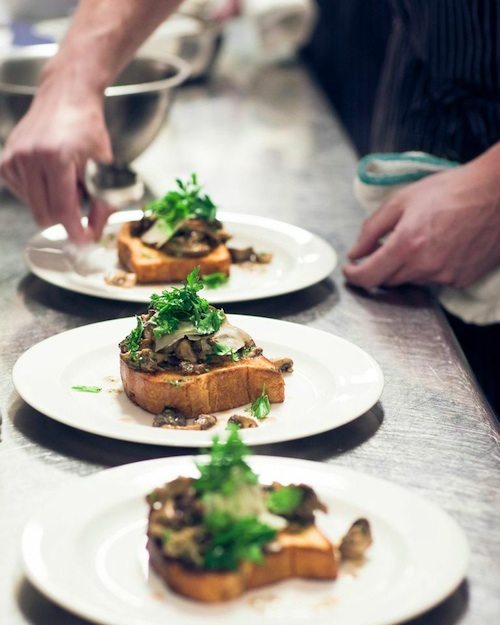 But how do you approach French cooking? Do you like the idea of trying to recreate a perfect dish or do you like to do your own take on it?
I like to do it right and in the way that the dish was thought of. I think, our customer base here in Vancouver; people like to recognise what they see on the plate. So if they order boeuf bourguignon, they want a nice warm, steaming dish, with a rich broth, chunks of beef and vegetables. Sure, sometimes people do their take on a classic French dish, they'll maybe deconstruct that; a jelly of red wine sauce, a few pieces of meat, micro vegetables, but everything we do and make is French-inspired and recognisably so.

Can Vancouver take the serious French classics though? Something like tête de veau can be quite challenging!
I think so, yes. We do the accessible things, of course, like the French onion soup with that rich beef broth, but we do veal blanquette, duck confit too. These dishes, they may sound simple but you'd probably not make them at home, people come here, order them and recognise that effort. Whatever is in season, that's what we'll work with and that's why our menu changes but we always go back to the classics.