Behind the Scenes: Gastown Barmen Get Naked

Share All sharing options for: Behind the Scenes: Gastown Barmen Get Naked

Taking inspiration from the wildly-popular Vancouver Firemen calendar, (do buy a copy and support those strapping chaps, please) Bambudda's Sean Hewlett has herded together 14 of Gastown's finest to remove their standard issue vests and hats to raise cash for breast cancer and prostate cancer charities.
Working with creative director Robyn Jenkins, who produced the 2011 and 2013 Firemen calendars, she says Vancouver barflies are in for a treat when the calendar launches later this year. 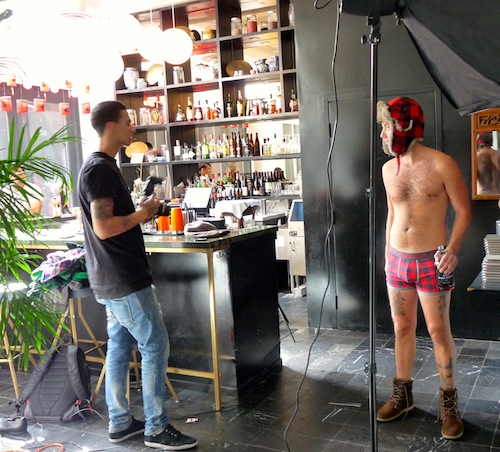 "Firemen may work out a lot," says Jenkins, "But a lot of barmen are part-time actors or models and once they get in front of the camera then they can really work it well. Firemen have to be very athletic and work out - it's part of their job - but bartenders are really good at drinking so they usually have a very nice one-pack with the six-pack behind the bar. We have had to remind them to tighten up the tummy a little bit."

The bartenders came up with their own concepts for the shoots, which took place in bars around town. Sexy Cinqo de Mayo, Sexy Ski Guy, Sexy Lumberjack - there's a bit of a theme here as you can tell, but having been at one of the shoots, it's definitely tongue in cheek. As organiser Hewlett says, "Basically, it's like going to the dentist, where you brush your teeth for days beforehand, I've been seriously working out. I mean, no-one's ever going to pay me to do a sexy photo shoot so I figured why not just do it anyway for a good cause?"

If you want to sponsor a page or donate to help cover printing costs email them here.