Open Door is a regular Eater feature where industry insiders open up. This week we feel incredibly honoured to have one of Vancouver's most popular and talented chefs Own Lightly write for us about how his on-going cancer treatment this year has changed his relationship with food. 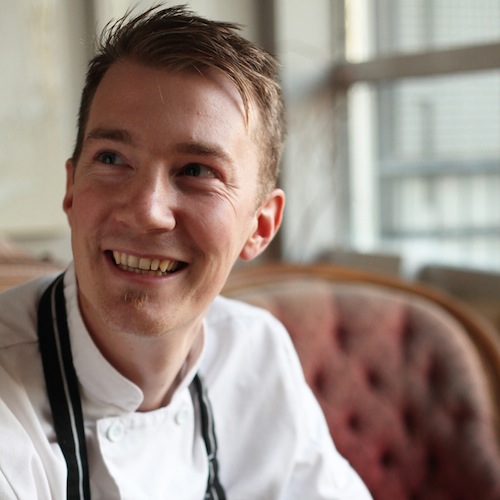 Working in professional kitchens, you are expected to be ready for anything. If a tour bus full of hungry tourists rolls up at 10pm, you make it happen – no questions asked. When I was diagnosed with stage-four colon cancer, I went straight into this 'ready for anything' mindset. Yes, there was shock, denial, anger and all the things that come along with a life-altering illness, but I truly believe the 10 years served in kitchens gave me a resolve that has helped me fight this fucker of a disease.

I'd been feeling sick for over two months before the diagnosis and was desperately searching for an answer to what was wrong. I'd been to numerous walk-in clinics, had an array of blood-work and other tests, but no one could figure out what was going on. Finally, on a trip to emergency, a doctor ordered an ultrasound and it became apparent that it wasn't the flu I was suffering from.

Chemo treatment started soon after and things slowly started to change. The cancer symptoms gradually faded and were replaced with the side effects of chemo. There's a laundry list of nasty things that come along with this treatment, and it's certainly been a rough ride, but the fact that it is working so well makes it worth it.

Food quickly became a joyless, but necessary affair. Choking down a cup of broth was a chore. For a creature of comfort this was a hard pill to swallow. Gone was the bolognese, brown butter and bacon and in were the kale smoothies and consommé. I quickly lost 50 pounds. As treatment progressed, my appetite began to come back and my doctor encouraged me to eat as much as I possibly could to put the lost weight back on.

Since being diagnosed, how I look at food has changed. Purity has become more important than ever – the purity of the ingredients, as well as the purity of the path those ingredients take to get to the table. I cook with more love and purpose than I did in the past, which has made it all the more fulfilling. Fighting cancer is all about love and positivity, and I try to show myself some love everyday by putting the best possible stuff into my body.

If I had to pick one thing to eat for the rest of my life, it would be pasta. I love that such a seemingly simple thing to prepare can be messed up so easily. Forget to salt the pasta water and you're screwed; overcooked or undercooked, you're ruined; sauce too watery, you've got soup. There are many life metaphors to be found in its preparation. How can this mixture of flour and water be so satisfying? I don't know, it just is.

I certainly miss the act of cooking for other people, but something I miss just as much is the daily routines that come along with the job. Things like setting up your workstation just so, making lists and subsequently crossing things off that list are some of the most satisfying things I know of. I am able to do this at home on a small scale, but it's just not the same. A sample list at home might include finish article for Eater, go to the bank, or make dinner. Important stuff for sure, but not quite as spine tingling as braising 80 pounds of short ribs or filleting 10 salmon. I have no time restraints in my life right now, where as in the past they ruled my day. Stress is certainly unhealthy, but it can be a fun ride if you're up for it.

In my past restaurant life, after the fifth espresso on a busy day I would be a humming ball of nerves. I tried to keep it cool, but for many years I was utterly stressed out. Did I leave the ovens on? Was the fish wrapped up properly? Did I actually place the order with vegetable company or was that just a waking dream? These are all questions that would float through my mind hours after leaving the restaurant. Stress feeds cancer, and I can't help but think that ignoring my stress was a contributing factor to the disease.

I've promised myself that I won't get that stressed out ever again. I'm more relaxed now than I have been in ten years. My amazing support network and the fact that the treatment is working, fills me with hope that I'll be back in the kitchen sooner than later.

· Back in business: get in touch with Butter on the Endive, Owen and his partner Naomi Horii's full service catering company.