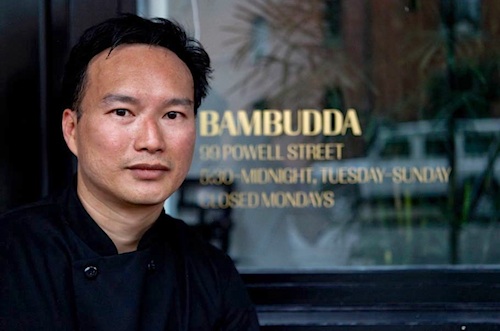 So where do you go to eat on days off?
I'm basically food-obsessed and I like things that are not too expensive; so on my day off I'll go and try different things. My favourite places are in Richmond, I like to go and check out the food courts there. I eat a lot of Asian food because that's just what I grew up with.

So where's good?
Chen's in Richmond do a pan-fried pork bun that I'll always order. It's northern-style Chinese comfort food. XLB - what they call a soup dumpling  - xiao lung bao - like a wonton wrapper but slightly different consistency with a meat and broth filling. The broth is gelatinous when it's cold but turns into soup when it's steamed. The soup is really nice, it's amazing here.

Anywhere else?
The President Plaza mall by Number 3 is one of the older strip malls in Richmond, I guess it's more pseudo-Hong Kong nowadays with the influx of Northern Chinese style. I go to a place called O'Tray.

What do you order?
They do this thing called a tianjin egg wrap. It's a Chinese crepe with bean paste and a crispy home-made wonton wrapper that they deep fry and put in scallions and roll it up, oh, it is great! They also do a soft tofu custard but they do it savoury with chili oil and that's a different take that I really like.