Share All sharing options for: Call Your Realtor and Move To Cloverdale: Top Chef Canada's Matthew Stowe Has Big Plans

After his win on Top Chef Canada this summer, Chef Matt Stowe is currently working with Cactus Club Cafe as a product development chef, but he has big plans for next year which he shared with Eater at the recent Fairmont Apprentice dinner at the Fairmont Waterfront. 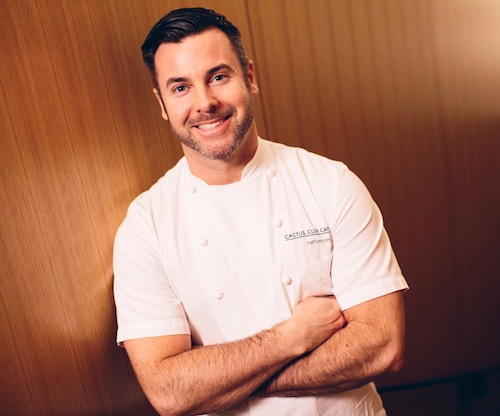 So, what are your plans?
I'm planning to open my own restaurant in the near future. It's always been my dream to open a chef-driven restaurant in Cloverdale, the town that I grew up in. There's definitely a need for a restaurant like that there.

What is it that makes Cloverdale special?
All these chefs in Vancouver have been using products for years which come from that area. I think it would be cool to be able to showcase them to the locals, people who have a direct connection to the products who'll be able to say, 'oh, I know where those eggs came from."

what's the food scene like in Surrey? Can it support something like this?
I think that the food scene is just starting to take off. I look at restaurants that I went to when I was young, there was a lot of European immigrants in the 80s who settled there so we've got great Italian, Greek and French restaurants, but as the operators and chefs got older, maybe they're not as inspired as they once were. It's not un-sophisticated at all out in Surrey, but there's a need for something that celebrates the seasons and the products out there; bringing that 'downtown Vancouver fine dining' to the suburbs.

And, of course, it's cheaper...
There's a lot of positives about that! The rent for instance. Also, I'm from the area and Ill be working closely with the farms, I can drive five minutes and pick up what I need.

What style of cuisine can we expect?
It's modern Canadian; taking flavour profiles from across Canada. The beauty of Canadian cuisine is that we can draw from so many flavour profiles. If you're French or Italian or Indian you're almost set in a box and there's parameters that you need to follow but the beautiful thing about cooking in this country is that you can take food and culture from any area in the world - because we have every ethnicity here - but then being able to use Canadian products to execute that food is kinda freeing. Bringing the two together is what creates that cuisine, then using modern technique and a few things to keep it interesting and fun for the guest is what ties it all together.

Do you feel like Canada is on the wave of a food revolution?
Canada is such a young country with regards to food and wine; it's such an exciting time to be in the industry. We're writing our own history right now and it's so cool to be a part of that.

And there is so much talent here in Vancouver.
Chefs are inspired by the surroundings here; we're inspired by the hard work of the farmers, the products that they're growing and we're inspired by the seasons as well. One of the fun things is that the seasons are so short and for chefs, who all have that A.D.D. personality, it's perfect. When you're tired of asparagus after four weeks the next thing comes along; fava beans, morels, peas, then stone fruits. Right as you get tired, something new appears and it keeps us on our toes and keeps us motivated.