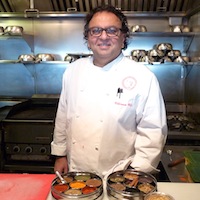 Vikram Vij's long-awaited "My Shanti by Vikram Vij" will open at the end of February/beginning of March in Morgan Crossing, South Surrey. In addition, Vikram will also be opening another restaurant on Cambie and 15th, which he told Eater will "Technically be Vij's in a year from now. (The old Vij's) will be a new concept of mine; Rangoli will stay - and altogether that will make four places." [Eaterwire]