Award winning chef, restauranteur and currently appearing on the Food Network's Chopped Canada, Vikram Vij is a busy man: two always-busy Vancouver restaurants (Vij's and Vij's Rangoli) plus two more in planning stages and a People's Choice award-winning food truck. Eater spent an hour with Vikram in the kitchen as he prepared lunch and talked molecular gastronomy, TV chefs and the future of Indian cuisine. 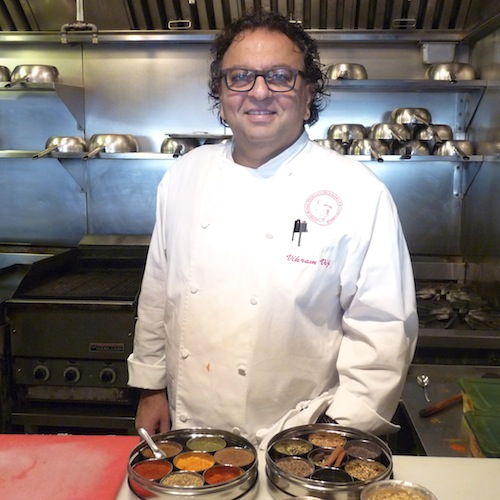 I want to talk about TV chefs - you're doing quite a bit of TV work and yet you definitely seem to give the impression that you're not the stereotypical 'celebrity chef'. You still seem to spend a lot of time in your restaurant and keep that connection.
OK, so if I had called my restaurant Taj Mahal or Cuisine of India people wouldn't care if I was there or not. But I called it Vij's so Vikram Vij should be present. Actually, the name is not me; it's to honour my grandfather, my father's father. He was from the Pujab, and he planted the seed in my head: 'You love food and I love to drink we should open a restaurant - you be chef, I'll be bartender'. I trained as a chef, studied in Austria, the TV thing has just come about in the past few years, but in my heart of hearts I am a chef and I love to cook. This is my home, I want to welcome people; these are not just restaurants they are an extension of how I think, how I feel and what I love.

I think amongst the worst culprits is someone like Gordon Ramsay - when was the last time he saw a kitchen that didn't have a camera in it? Can he still call himself a chef?
You go to school to study to be a doctor, a lawyer or chef, there's no school for celebrity. I don't think you can be a celebrity chef; you're a chef who just happens to have some notoriety. How does Gordon do it? That's a question for him to answer, but how do I do it - I love the kitchen, my passion is the kitchen. I don't chop and cut anymore - but I'll create a dish and that will be out of love.

How did the TV thing happen?
Someone just came up to me and asked me to do it. I did a good job and one thing led to another - it's totally organic, I'm not shopping myself around! I've never considered myself to be a celebrity chef; I'm just a chef who has two Indian restaurants which seem to be doing well. 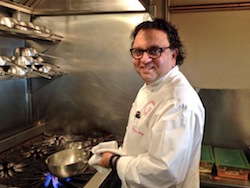 And a food truck too. When Vij's Railway Express won the People's Choice award in the EnRoute Best New Restaurants in Canada last year, it felt curiously appropriate - in a west coast casual way - for a truck to win.
No great city is without great restaurants with great food - served casually or high end - take anywhere; London, Paris or Bombay. Vancouver is a west coast casual, relaxed place; we're not judging people by what they're wearing. But on one level I think you should dress up when you go out, it's beautiful theatre to have delicious food. You don't go to yoga in a suit, so don't turn up to dinner looking shabby. Make yourself look a little pretty! Although we have Bishop's - which is high end - Cioppino's and the Pear Tree, there's nowhere super-high end here, I don't think we have the population to support that

I feel like people in Vancouver want 'fancy' on the plate - not on the walls.
Never, ever has a food truck won a category like that and an Indian food truck never won. That to me is a coup - we've finally arrived; that's a barrier broken - it's like giving women the vote or ending apartheid.

You really think Indian food is so misrepresented here?
Yes, people think it's just butter chicken and tandoori chicken and chicken tikka masala. That's what they know. Yes - that is a big part of our cuisine but we have so much diversity.

Perhaps it's a lack of formality with Indian cooking that's led to it being shunned - you never used to get chefs staging in India, not like going to France.
I'll tell you why: we as Indians were not proud of our cuisine, we created this everything-in-a-pot style. In France you'll find, 'Oh, I do classic French, I do traditional, I do nouvelle cuisine'. The French are so proud of their cuisine and we Indians never were. Only in the last maybe 10-20 years has this pride come through. 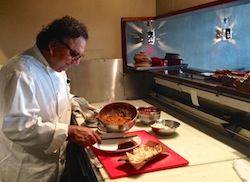 But you've got the longest shadow of history over you from the British Imperialism.
Exactly. So many older Indians believed that the Brits should have stayed in 1947 when India became independent... they're not proud of their culture of being Indian, they think Britain is better. We need the younger generation to be saying 'we're proud of ourselves, of our culture and cuisine' .

Well, as a country you had 500 years of British occupation telling you you're beneath them...
It's not going to turn around in one generation. You need to wait for it to happen. The next 20, 40 years, chefs will push those limits; cook food so that people will understand the way that the spices and flavours are done, we need to create - not just serve 'Indian food'

Do you ever want to play with food? Get into molecular gastronomy, perhaps?
I think it's maybe a little too much - I'd need a full lab for it, like Ferran, you'd have to close the place every six months to come up with funky things. I cook soul food; but I do some stuff - not molecular - but I used to have a venison curry that I'd put chocolate with garam masala spices and make a foam; it was very funky. We do a beef shortrib with white fennel and cardamom jellybeans, so we do play a little.

Finally, what was the one thing you learned at school in Austria that you'd like to do now, something totally out of character that would blow people's minds?
Beef tongue! I used to make a delicious sliced beef tongue, I'd cook the whole tongue, sear it, put it in a warm red wine stock, cook it very slowly and I'd stud the tongue with cloves and I'd make a marmalade out of the sauce. I'd serve it carpaccio style. Ok! I'm gonna do this. Thinly sliced, cool it down, layer it on a beautiful plate, pickled gelatin on top - I love that kind of stuff. I'm gonna do it! I'll do it in the new restaurant, My Shanti by Vikram Vij.