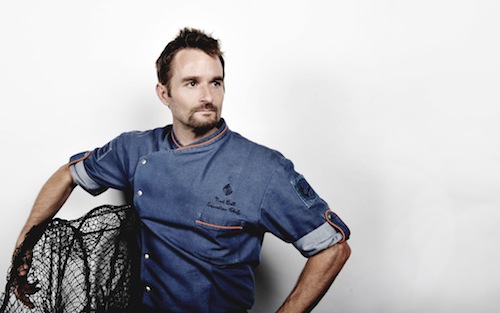 Where do you like to go to eat?
Gorilla; it's a couple of blocks away from the hotel, it's just a little tiny place, kind of underground, it's a raw, vegan/veg place. They're about to move into a second location about a block from Cuchillo too with a larger commissary.

How did you find out about it?
I've started to hang out with people who are in that world of health and wellness and it's a go-to place for them. It's all about wholesome food that makes you feel good.

What is it about it that you like?
I love that style of food; nutrient-dense, plant-based cooking, it's so unique, everything they do is raw, vegan or vegetarian. It doesn't use traditional food stuff, so if they have a nut garnish they dehydrate the nuts, have it with a date paste so it's a sweet and salty and delicious. They make their own bread, but it's a sunflower sprouted one that's incredible. It's not a bread that's leavened - not like yeast - it's a raw flatbread. So, say you have a sandwich, it's not a traditional one, like at Meat & Bread, it's a raw flatbread with a bunch of different spreads and sprouts.

What do you order when you go there?
It's really a lunch-time spot, they don't open for dinner, so they are famous for their sandwiches and incredible soups and salads which have 15 or 16 ingredients in them. I go and have their daily feature, which is usually a ragù or bean or legume dish. It's become my staple, healthy middle-of-the day meal which I want after a run around Stanley Park.

You're basically renouncing butter, aren't you?
No! Not at all, I had a big bowl of buttered popcorn last night, but the fastest thing for us chefs to eat is what's at our fingertips - which may not always be the healthiest thing - day after day. I used to be a lot heavier and decided that I didn't want to be the fat chef, I wanted to be the fit chef. You have to balance your diet with all that indulgence; say I have a burger and fries - what I really want! - I'll have a lull afterwards and I need to get energy before a busy service, so it makes sense to eat easily digestible food which you can draw nutrients from quickly and turn that fuel into energy. And it's delicious!