Top Chef Canada's Evelynn Takoff: "I'm a Strong Female Presence: I Stand my Ground and I Can be Stubborn."

Share All sharing options for: Top Chef Canada's Evelynn Takoff: "I'm a Strong Female Presence: I Stand my Ground and I Can be Stubborn."

Born and raised in the Okanagan and currently the chef de cuisine at Micro Bar Bites in Kelowna, meet chef Evelynn Takoff one of the four BC contestants on the fourth season of Top Chef Canada which airs on the Food Network tonight. 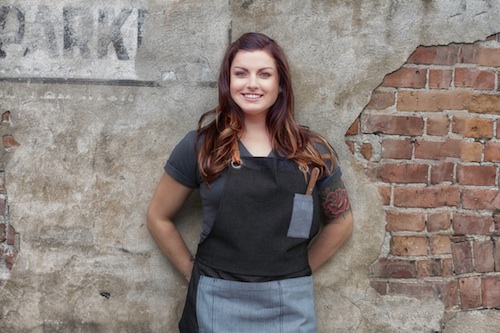 What made you want to apply for the show?
I was really interested because I really wanted someone from the Okanagan to get on Top Chef Canada and no one had. There'd been some really strong female presences on the show but they never seemed - except for Connie (Connie DeSousa, Charcut, Calgary) to get right, right, right to the end. I felt that I was a strong competitor and I'd have a good chance of doing that.

What did you have to do to get on Top Chef Canada?
I applied online and sent in an application video which was fun to film; you just tell them about yourself, where you come from and why you love what you do. And then I had a couple of telephone interviews and that was it!

What was different about cooking for TV?
I'd never cooked with a camera on me before - even having people around you with sound equipment and camera equipment when you're just there standing still was terrifying to start with. But once you have to start cooking you have to forget about it because you have focus on your task that you have to do and you just forget they are there. Of course, sometimes the crew get in your way or the sound guys might ask you to repeat what you said and you're all 'I don't know! I don't have time!' Everything is against the clock - it's always timed and they don't stop. 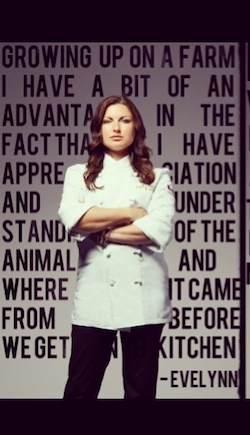 What was the hardest part?
It's complicated; there were times that I was really frustrated with the crew being around me and in my space. It's hard to work like that; especially when you're under time restrictions. They do a really amazing job but sometimes you'll just end up in each other's way.

What were your fellow contestants like?
At the start, everyone's really friendly and joking around but as things progress, sure, everyone was still friends but it got a lot more competitive - especially in the kitchen. We all wanted to win. I was really good friends with Vittorio and Rene; Vittorio's from Toronto and Rene's from Ottawa. Pierre from Calgary and I were pretty good buddies too. I tend to be one of those girls who hangs out with the guys, joke around and talk about dirty, inappropriate things, swear a lot...

Be a chef then?
Yeah!

What do you think you bring to the show?
I bought a strong female presence; by which I mean a strong woman. I can be very opinionated, and I stand my ground and I can be stubborn. I definitely wasn't a push over

And what about on the culinary side? What are your strengths?
Having grown up on a farm, I love to take things from the earth or whole animals and work with them, breaking them down, turning them into something else. I've had a bit of experience raising livestock, slaughtering it and butchering it; I know that a lot of chefs might not have had that in their life and I feel like sometimes I have a different relationship with food because growing up on a farm you get to raise everything.

TV cooking shows so often tend to be about ego and showing off, rather than about the food. Chef Andrea Carlson told us that she'd never do one. How did you navigate that side of things?
It's hard sometimes, some of the challenges were a physical task, for instance, you had to do a lot before you actually got to the actual cooking part. The challenges were so hardcore and out of the box, it was really stressful, you had to do a bunch of other stuff and then go and cook, so it made the cooking part really hard.

Did you learn anything from the experience?
I learned a ton; I learned a lot from the critiquing from the judges, but also from my fellow competitors: lots of different techniques, different ideas. The best advice judge Mark McEwan gave me was to cook simple food and be true to myself, don't go too far out of the box or do anything too crazy. I think triggered something in my brain; I think I was trying too hard in the beginning to stand out when what I should have done is just relax and cook really good food. I learned from that.
· All Previous Top Chef Canada Coverage [EVAN]
· All previous Eater Interviews [EVAN]
· Top Chef Canada [Official site]
· Micro Bar Bites [Official Site]