Men vs. Women Chefs? What happened to the Food?

Share All sharing options for: Men vs. Women Chefs? What happened to the Food?

Open Door is a regular Eater feature where industry insiders open up. This week, after the controversy of Top Chef Canada's "This kitchen is no place for a woman" posters, we were contacted by Gusto TV, a food and lifestyle channel who wanted to put across their point of view. 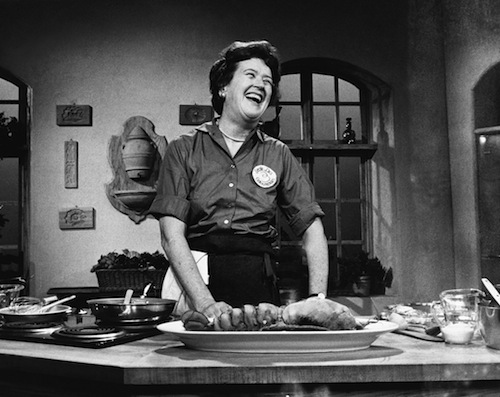 [Photo via Julia Childs The French Chef/Photo via WGBH TV]

Kathy McIntyre is Senior Director, Creative Content at Gusto TV, she has produced, managed and co-written more than 400 half hours of television programming, aired in 65 countries around the world and on networks such as Food Network, DIY Network, BBC Canada, BET, Discovery, and HGTV.

Last week the online world reacted strongly to an ad that declared, perhaps short-sightedly, that "This kitchen is no place for a woman'. Huh? Do you have to have more facial hair in order to be a great chef?

Pitting men versus women in the professional culinary world does nothing other than fuel a fire that has been burning for, well, ever. Years before she became the First Lady of food on TV, Julia Child broke the mold and joined the class of 1951 at the famous Le Cordon Bleu Culinary Arts Institute in Paris. Today, women are still pushing against the tide to wear the tall hat in professional kitchens around the world. 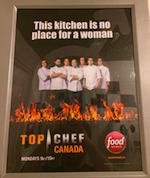 As a television producer who has been making food programming for 15 years, I have had the pleasure of working with some of Canada's best chefs, male and female – Michael Bonacini, Rene Rodriguez, Ned Bell, Elizabeth Manville, Caroline McCann-Bizjak and more. I can tell you that, 14 years ago, when we were casting for the first season of Cook Like a Chef, there wasn't a big pool of female chefs to draw from.

Recently, I took on the role of Director of Creative Content for Canada's newest food and lifestyle channel, Gusto TV.  We just finished a national Casting Call and I can honestly say that we now have as many quality, talented female chefs as male chefs to choose from for upcoming productions. 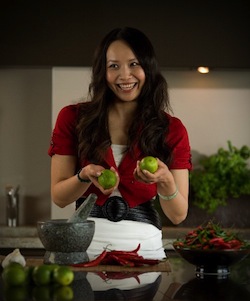 It's an exciting time to be a new broadcaster in the world of food TV. There is a lot of great talent out there, ready to share their passion for food with our viewers.

So why pit men versus women?  Let's just focus on the food.

No more intense chefs instilling fear into hearts of passionate cooks. No more negativity. No contrived reason to show great food.  People who love food want to see a great dish – hairy knuckles or not!

Food programming can be celebratory and showcase people having fun while they cook – like Rob Rainford in Licence to Grill – not chefs trying to cut each other's throats. It should show great food that makes you hungry and curious, like when James Martin cooks up an incredible Mediterranean dish.

It should let you watch people laugh a little and tell a great story – like Carlo Rota in Edible Roadshow – or show the viewer something new like on Martha Stewart's Cooking School.  Or it should take us somewhere exotic and exciting, like Nici Wickes does in World Kitchen, and showcase rich cultural diversity like Gusto's Global Cuisine lineup does each week.

The fact is, as television broadcasters we have a big voice that's heard right across the country.  Let's use that voice to celebrate food and not reinforce stereotypes.