At 25, Evelyn Chick is the youngest Bar Manager in Blue Water Cafe's history, but don't be fooled - age certainly doesn't mean inexperience for this award-winning bartending professional who recently bagged the highest practical score in North America for her BarSmart certification. Evelyn just launched her first list at Blue Water and sat down with Eater to talk whisky, creativity and the importance of a good margarita.
Tell us about your new list.
It's just launched and I'm doing a lot in conjunction with seafood, of course because it is Blue Water Cafe; it's a medium-palette list, bridging the gap between very obscure cocktails with 14 ingredients and home-made everything to simple vodka soda-type drinks. For me it's about introducing people who are maybe unfamiliar with strange ingredients to a slightly more adventurous but not scary style of drink. I've separated the list into pre-dinner aperitifs, three barrel-aged cocktails (I think barrel-aging is such a delicate procedure and there are only certain cocktails that work, so I'm only making three), then a dealer's choice section, which is our Blue Water past and present cocktails which myself and other bartenders have been proud of creating and finally a classics list.

What will surprise people about the list?
You'll see cool classics which you maybe haven't seen for a while; like the Charlie Chaplin, which is just three ingredients, sloe gin, apricot bandy and lime juice. It's so delicious, there is so much depth. It's originally from London, pre-prohibition, I believe. I came across it and thought 'These ingredients will never work - are you kidding? It's going to be overly-sweet and ridiculous!' But I made it and wow! That is the quintessential let-the-ingredients-play-themselves-out drink. I'm also featuring recipes from bartenders that I love. To be in this bartending and cocktail hospitality industry is so fantastic. I can't imagine a better job because you get to celebrate other people's talent every day. You're celebrating creativity which is amazing to me. 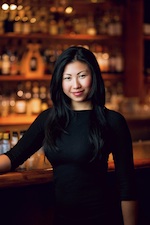 Which bartenders are you featuring now?
Robin Goodfellow from the Ursa bar in Toronto won a Chartreuse competition and he posted the recipe on Facebook. He's a good friend and such an inspiration to me, but I looked at it and again thought, 'This is not going to work! No way!' But I made that drink and holy crap - it's the most delicious thing. It's extremely obscure; espresso with green and yellow chartreuse and angostura bitters - it's a herb garden with coffee thrown in your face! It makes sense because espresso with the chocolate notes along with chartreuse's minty, honey, herbal notes completely work together. Of course I wanted it on the list! I'm planning to feature bartenders from around the world too, I won't reveal who yet - but there are names on a list.

People like Phillip Duff?
I wish! It would be amazing if I could email Phillip Duff and ask him for one of his cocktail recipes for the list or ask him to create one! Through travelling and doing competitions I've met so many amazing people; so at Blue Water I'm going to be featuring drinks from bartenders all around the world and I'm starting with Canada because it's home.

What are you planning for the future?
My next list I'll bring in more exotic fruits for people to have after dinner on the patio. I'm bringing in other people's recipes—and I'm not afraid to put our recipes on the list either— I'm not the type to be offended if people ask me for my recipes. I love to share; if people in different parts of the world can try my drinks that would be amazing.

Finally, for people who've never been to Blue Water, is it really a bar you can go to just for drinks?
Absolutely; that's the idea behind this new list. We still have the most intense Scotch list I've ever managed; we have 170 whisk(e)ys - I think the Shebeen wins at about 250 or 300 but our whisky and scotch list is right up there. Our late night crowd is great; the bar is full after 10.30p.m. so I figure I'm doing something right! The price points are reasonable from $11 to $15 across most of the list and then we have a luxury list using ultra-premium spirits at $21 like a 23-year old rum old-fashioned which is delicious. I also have a Tommy's Bar Margarita because I love San Francisco and decided I really needed to do a Tommy's margarita in Vancouver and I use Don Julio Reposado. Obviously, our wine programme is great; we've won a ton of awards for that.
I want people to see Blue Water as the whole package - amazing food, wine, cocktails - everything.
· All Previous Blue Water Cafe Coverage [EVAN]
· Blue Water Cafe [Official Site]
· All Previous Eater Interviews [EVAN]