Blacktail Florist, one of the season's most hotly-anticipated restaurants opens this evening in Gastown with chef Jimmy Stewart at the helm. Stewart, an ex-Top Chef contestant is well-known on the BC restaurant scene from time at the Bearfoot Bistro, CinCin, House Guest and even the Roaming Dragon food truck. In the first of a two-part interview, Jimmy talks to Eater about Canadian cuisine and why all Vancouverites should go out foraging.

The Blacktail Florist is opening in the same space that House Guest used to be in, and of course, you were chef there. Is this a progression from that restaurant?
There is honestly no comparison; this is an entirely new restaurant; House Guest is something in the past.

But isn't it the same team?
It's the same people in terms of larger ownership—but it's all me with my management team and my kitchen staff—House Guest was a different machine; it was a supper club, we're a full-on restaurant, serving really good food with great wine pairings and a great beer programme.

So what's your vision for Blacktail Florist?
We want to become one of the newer restaurants promoting Canadian food. It's becoming a thing now; younger chefs across Canada are trying to find their identity and this restaurant is me finding mine. As someone growing up in the world you think: what do I specialise in? Do I do French, do I do Italian? Let's find out what Canadian food is and open up that dialogue, find out what it is besides poutine, smoked salmon and maple syrup.

So is it Canadian or Pacific Northwest?
For me, there are ingredients and there is culture. Canada on the east side is predominantly French, the west coast is very English: British Columbia. Underlying that, Canada was built on the backbone of Chinese and Japanese labour for the last 100 years. We have very well-established Chinatowns in Canada and you'd be hard to find a city that has more sushi of such great quality than Vancouver. We're not saying we're going to be a Japanese restaurant but we're going to use their cultures to inspire Pacific Northwest ingredients and evoke emotions through memories of living in Canada. There are certain things that we do here that don't happen anywhere else and I think that's really cool

What kind of things?
A great example for me is stinging nettles; it's a thing that we have and we only have them for a short time so we either celebrate it or we don't, and that's a memory you create here. Look at cuisine and culture; France; hundreds of years, Russia, hundreds of years and generations of people growing up, cooking in the kitchen with their grandmother and stuff. As a new developing cuisine, we don't have that to draw upon, so what do we have? Those smaller memories. Let's say a family from Thailand moves to Vancouver, they've been making Pad Thai for years, they have their recipe, handed down through the generations, now they come here they start making it with Canadian ingredients - is that authentic Thai or is it now part of Canadian cuisine? 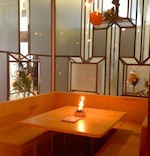 How does that affect the kitchen?
We don't have olive oil or lemons in the kitchen; it doesn't work here, so we're only using white wine vinegar. Have you ever seen a citrus tree here? No! Acid is one of the biggest pillars of cuisine, you need to have acid but we'd rather use vinegars and plants which are naturally acidic. There are three different types of leaves you can get right now which all have interesting lemony flavours, or an acidic zing if you will - why wouldn't we use that instead of importing lemons? We go out and find that ourselves and that connects us in the kitchen to Vancouver.

You're clearly a fan of foraging.
For sure, it's fun, right? I think it's something people in Vancouver should do. The Baden Powell trail near Deep Cove you'll see lobster mushrooms, pom poms, fiddleheads, stinging nettles, reindeer lichen - these are all ingredients that are known throughout the world because of someone like Noma, but we have all these things in our back yard - it just takes someone to go and look for them. Which is what we want to do here.

So what's the ethos here?
Number one, we don't want to be detrimental to our environment and number two we open a dialogue of what Canadian cuisine can be, besides Pacific Northwest ingredients or farm to table - it can be so much more than that. We're such a young country; I'm Vancouver born and raised and ten years ago, Gastown, there was really nothing here culturally, there were no interesting bars here or places to go. People talk about locavore or farm to table, what they're trying to say is 'seasonal'. It's a buzzword, everyone gets wrapped up in: guys, you're being a seasonal restaurant focussing on your ingredients of time and place. We want to make people-friendly food that brings them in to experience something new.
· Blacktail Florist [Official Site]
· All Previous Blacktail Florist Coverage [EVAN]
· All Previous Eater Interviews [EVAN]