Share All sharing options for: Lime Crisis in Vancouver?

Blame it on the weather, truck strikes or even Mexican drug cartels, but when it comes to limes things are sliding downhill faster than a greased pig on a tray. We knew things had gotten bad but last week the unthinkable happened; a lemon wedge instead of a lime in some take-out pho. Clearly the lime crisis has hit Vancouver. Take a look at the citrus section in your local grocery store; lime prices have skyrocketed in recent weeks and the citrus crisis has been well-documented over on Eater National, but we wondered how it's affecting restaurants and bars in the city - and whether you can just switch a lemon with a lime and not really notice the different. To find out we visited La Mezcaleria to see if you can make a margarita with lemon instead of lime. Turns out, yes you can, but please don't, it's absolutely revolting.
We contacted a number of chefs and bartenders across the city and asked whether the lime crisis is affecting what they do. Here's what they had to say.
Have you been hit by the lime price hike? Got a wedge of orange in your ramen? Been blasted by a crazily over-priced mojito? Let us know in the comments or hit up the 100% confidential tipline

We just did the sign for a joke; Vancouver restaurants are used to overpriced products and not passing the cost on to customers (insert LDB joke here). - Ron Oliver, Mamie Taylor's. 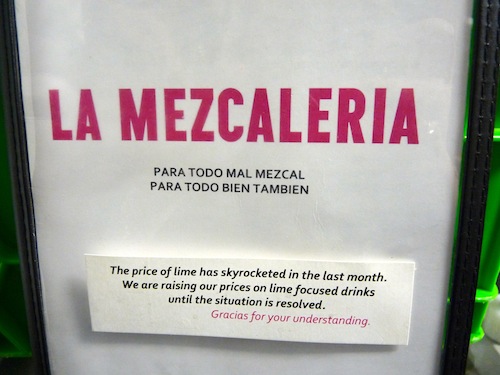 "As a bar manager in a Mexican restaurant, you can imagine how the lime situation has affected our operations. Limes are 4-5 times the price they were when La Mezcaleria opened. We have had to raise the price of some of our lime focused drinks temporarily.
We have stopped using limes as decorative garnishes. We are generally using limes as sparingly as possible. There's a stringent austerity to lime juice; it just has a totally different energy, it can't be replaced. People think that maybe they can be replaced but they can't be- it's like switching an orange with a grapefruit." Kelly Woods, La Mezcaleria.

"We are cutting down on dishes that are lime heavy. If applicable we would use lemon instead and we're trying to stop serving drinks that have limes as well. For food we are using tamarind and lemons instead of limes." Angus An, Maenam, Longtail Kitchen.

It's damn unpleasant!! As you may well know, we go through a ton of lime juice - mojitos, margaritas, etc., as well as in the kitchen with the ceviches. As of now, we're just sucking it up. *frown* John Cooper, Cuchillo.

"We have a fond appreciation for lemons these days. Limes are off the menu for now. What we love about our customers is that they get it and work with it." Charles Tremewen, Longtable Distillery. 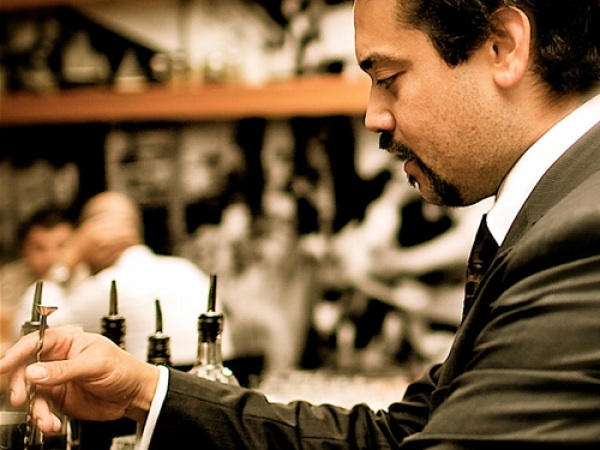 "Firstly, my cocktails tend to be entirely made of spirits, so my personal citrus juice use is minimal. The knee-jerk over-prepping of lime wedges for generic highball adornment is something I fight against as it's just a waste of good fruit - I cut my garnish to order at my guest's request and train all my Bartenders this way. This price increase is a great opportunity to veer bar culture away from overuse (and waste) of fresh limes." Jay Jones, Donnelly Group.

"Barely a blip for us, we use maybe a dozen limes every couple weeks so it's maybe twenty five dollars more a month for us." Curtis Luk, The Parker.
· All Previous Lime News [EVAN]