Sustainable seafood champion and celebrity chef Rick Moonen, from Las Vegas's RM Seafood at the Mandalay Bay was in town last week for a discussion at the Vancouver Aquarium and also a special 'Surf and Surf' dinner at YEW, where he paired up with fellow fish-fighter Ned Bell and a host of BC wineries, to create an Ocean Wise feast. Eater sat down with chef Moonen after dinner to talk about changes in farmed salmon and his first impressions of fresh-out-of-the-ocean spot prawns.

Have you been to Vancouver before?
I've been to Vancouver at least six times; this is where I had my epiphany about farm-raised Atlantic salmon years ago. A lot has changed since then on the east coast side, but I saw the effect that sea lice were having on the native stocks. Here you have five species of salmon that are still thriving and doing well, but these salmon farms were producing this incredibly healthy population of sea lice that were going out to immature pink salmon. We went out and grabbed some with a net and put them in the aquarium to examine them and they were lethargic; they were dying because they were affected by the lice.

And this was because of the farmed salmon?
I believe so, yes. There are people that will argue back and forth that lice are normal and it's part of the environment and yes, that's true, but sea lice have a natural cycle, like mosquitoes, in certain times of the year they go into dormancy. With the farms, the lice were healthy and prolific year-round. When there's usually a migration of the wild salmon population, lo and behold, these immature smolts who don't even have a protective coating of scales would get affected by lice and it killed them. When I saw that happening I said *whistles* gone—I'm taking it off my menu. But I'm actually starting to put farm-raised Atlantic salmon back now— from the Atlantic— because there are farms there that are addressing the environmental issues so much more effectively.
In order to have a healthy supply of marine protein that people enjoy we need aquaculture, but we need it to be responsible and they are doing that in the Bay of Fundy. I still don't believe that having non-indigenous species like Atlantic salmon; they don't belong in the Pacific. 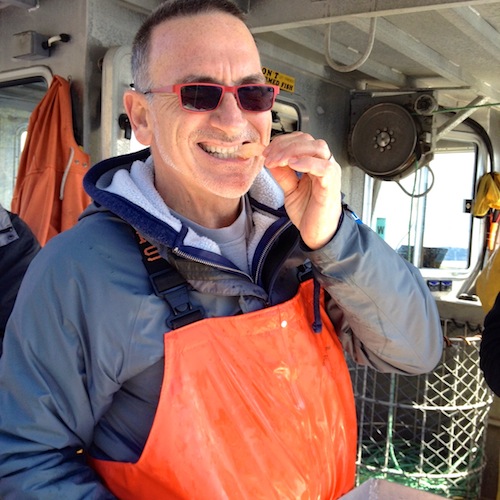 What's been the highlight of this trip?
Spot prawns! I was out with Steve Johansen from Organic Ocean and pulled them out of the ocean for the first time in my life! I peeled and ate one while it was still moving and ate one raw. To be able to take a live spot prawn and eat it, it was terrific, sooo tender and sweet and tasted like the ocean— what is better than that?

When you spoke to the diners at YEW earlier, you said you thought Vancouver was ahead of the US?
That's right, the mentality and embrace of sustainability in Vancouver is always so impressive. I've travelled around and I speak about sustainability to chefs globally, and I'm not just blowing smoke up your skirt, it's unbelievable here! Everyone seems to get it. True story; I went into a coffee shop and I start taking to a teenage girl about sustainability and said something about by-catch - and she said, oh yeah. I'm like, you know about by-catch? And she's said, 'Sure, it's when you start catching things you're not targetting'. My jaw dropped—why don't we get that in the United States? I talk about it constantly and travel around the world and you just get it here. Bravo, bravo!

I think it's because we are surrounded by the most gorgeous natural beauty and people want to protect that.
But you go to coastal cities elsewhere and they don't get it; people don't want to know where their food is coming from, they don't get it and they're not interested. You can't beat it into their heads! But here they are interested. That is the major difference, I hope that's an epidemic and it spreads into the USA.

Where did you eat while you were here?
I ate at Vij's— Vikram is a good man, I met him at Cooking For Solutions at Monterrey Bar Aquarium. I ate at Cioppino's, then at the Fish Counter and last night we ate at L'Abattoir, it was really good!