Celebrating its First Anniversary Longtail Kitchen's Angus An: We Didn't Want Another Maenam

Share All sharing options for: Celebrating its First Anniversary Longtail Kitchen's Angus An: We Didn't Want Another Maenam

The Longtail Kitchen is celebrating a year in New Westminster at the River Market this week. Angus An, one of the city's most talented chefs sat down to talk with us about his experience over the past 12 months in an in-depth interview. 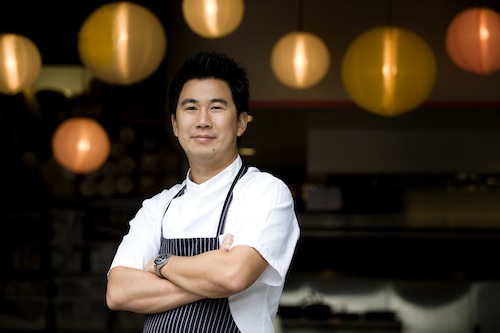 It's a year since you opened Longtail Kitchen, what was the inspiration?
It became clear to me when I saw the space what I wanted to do with it. I realised the concept, I saw the river, where we are in the market and I wanted something close to that; so street food. We didn't want another Maenam, we wanted something more casual and convenient for the people.

Maenam is already so casual compared to the fine dining experience that you began with at Gastropod - is the next stop a truck?
I think there is sector in our industry that's not saturated with good food; the fast food area, if you think about it there's really no such thing as gourmet fast food. In Asia, you can see street food everywhere, vendors have been cooking for generations, but here you don't have that, when you think 'fast food' you think about McDonalds. What we wanted was to give people a better option; come and enjoy lunch for $10 and you'll have it in less than 15 minutes.

But Longtail is so much more than a fast food joint
We wanted convenience and the option of a quick and easy lunch but as the concept developed, we realised that there was the potential to do so much more here. New West is such a developing city that there's a lot of young professionals moving out here. I wanted an open kitchen, a nice long counter and I realised it would be fun to host a lot of pop-up dinners. This allows us to be more fluid with our concept: by day a really casual Thai street food restaurant but by night serve whatever we want. It's like a nice supper cub for New West; we've gone as fancy as White Alba truffle dinners and we have different guest chefs, we can bring all that to New West so that they can try different chefs and cuisines all the time. We also wanted a really good retail aspect, people can come by and pick up lunch, something for dinner and spices and cookbooks. We're not just a restaurant we're a store and a restaurant and a take-out counter. 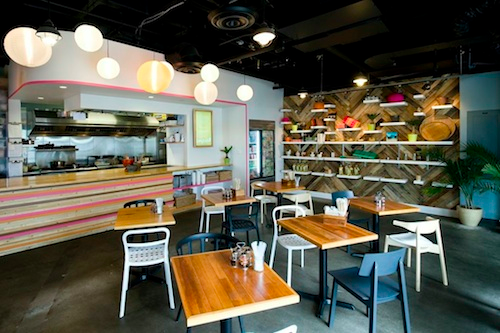 Do you feel like you can be more fluid here because you're not under the Vancouver spotlight?
Yes and no, I think it's easy because there hasn't been many people doing this before in terms of offering pop-up dinners in New West so it caters to foodies who moved away from Vancouver, but by doing so many different things, some of the people in New West may not be catching on yet. A couple of times, people have come in to pop-ups and didn't realise that wouldn't be Thai. It's a challenge to keep people aware of all the things that we're doing but as challenging as it may be it's definitely fun and rewarding.

What have been the biggest challenges?
It's been a good year, but I know the market place better now and I'm happy to be here in New West and excited to see what year two will bring. I've never owned or operated a fast-food/street-food small restaurant so a lot of things, food cost wise and staffing-wise you have to learn on the fly as you go. It's not the same as a sit-down restaurant with servers - we actually don't have servers, the cooks take orders, cook and then serve themselves.

What's been the biggest differences?
We don't have menus, it's all at the counter, so it's kind of like a food court but we have restaurant space. We wanted that interaction between cooks and customers. Figuring out a new market is tricky as well. There were a few menu changes that we had to make; we used to have a North and South Grilled Chicken on the menu - easily one of my favourite street foods from Thailand - however, that was our least favourite items and it was also the most time-consuming and least cost-effective dishes so we had to pull it off. The dishes that are popular - which makes sense now in hindsight to me, are easier things; soup noodles, broth noodles, things that people associate with a one dish wonder - like Pad Thai, easily our number one best seller.

You've made a rather fascinating progression; first you started with fine dining at Gastropod, then you decide, no - that's not it, so change to Maenam which is casual but with incredible food and now this.
It's a backwards progression in one way! But I kinda like it. I was thinking for myself, my five year plan, I don't want to open more restaurants, I want to open more places like Long Tail, I'd even take it more casual than this.

A truck?
I don't think it's as worthwhile as having bricks and mortar; people think trucks are very mobile and that their costs are low, but in reality you're often in situations that restaurants just don't have to deal with. Older trucks are worse than cars; they break down quite easily but they've very expensive if they're brand new. You have to figure out where to park them; you can't prep out of them so you need extra costs from a commissary kitchen. The costs typically compared to a small restaurant just aren't that different. And it totally depends on the city where your location is; I'd rather just have a good location and stay with it.

Do you miss fine dining?
I think as a chef you have to give people what they want; do I miss the fine dining aspect? It's something I've done for the majority of my career, but I have a family to support and I need to run a successful business - not just serve good food. I think a lot of times people open restaurants maybe as vanity projects, to stroke their ego or whatever, and it's hard to make money that way. As a businessman, we have investors that we need to answer to, bills to pay, for me I feel that in this city what could be successful is what we're doing right now. This direction that I'm going in isn't necessarily because I don't want to do fine dining anymore but it's the fact that I think this is what I need to do to be successful, so this is what I must do.

Are you missing the tweezers and the squeeze bottles?
I think that's why Longtail has that pop-up capability - so when I miss it we can have that in here. We have done those types of dinners and something like that, I shouldn't have to open a restaurant to satisfy an itch to cook a certain type of food, I should open a restaurant and cook what I think people will love to eat and right now in Vancouver there isn't a whole lot of fine dining out there.

Do you think this city can take fine dining?
There's a study done by Macleans magazine that Vancouver is one of the poorest cities in Canada; it has the lowest income, highest mortage to income ration because we have one of the most expensive real estate markets. In Calgary, the average income is around $95,000 and in Vancouver it's $64,000. If you think about even where Maenam is there are million dollar condos - how can people afford to eat out regularly? People still want good food but they can't afford the real fine dining.

Also, don't you feel that people just don't like that style of dining here?
People like to eat heathy and they like to eat quick on the west coast. I don't mind going to a fine dining restaurant and sit for 3-4 hours with a tasting menu but people don't seem to like that here. It goes with the lifestyle here and so we should just give it to them instead of fighting it! One thing you should learn about Vancouver people, is that they don't like to be taught; they have a pretty good idea of what's good and how and what to eat, which is hard because it's a very young dining culture but I no longer wish to educate people on what they should eat. If they want to eat this, then I'm going to make it for them and I'll try to make the best of it.
· Longtail Kitchen [Official Site]
· All Longtail Kitchen Coverage [EVAN]
· All Angus An Coverage [EVAN]
· All Previous Eater Interviews [EVAN]