Updated: Where to Eat at YVR Vancouver Int. Airport

Share All sharing options for: Updated: Where to Eat at YVR Vancouver Int. Airport 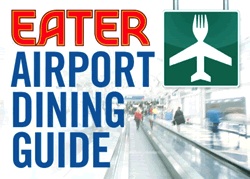 Need a good place to eat at YVR Airport? Look no further. Here's the updated Eater guide to YVR International Airport. It maps out every food option throughout each terminal, from quick snacks to leisurely meals, hockey bars, and more. Got time to leave and see a bit of the city? We've even got a guide to the best dining bets a few minutes away from the airport. Essentially, it's all you need whether you're rushing for a flight or hoping to kill a long layover.
[Compiled by Robyn Hanson]

Globe@YVR: Hidden away upstairs in the Fairmont Hotel Vancouver Airport, Globe@YVR offers Pacific Northwest inspired fine dining, including sustainably-caught Ocean Wise seafood. It's an elegant retreat from the airport atmosphere, with views overlooking the mountains and runways. [Directly above US departures]

Monk's Grill: The legacy of Monk McQueen's, the former seafood restaurant on Vancouver's False Creek, lives on here at the domestic terminal. One of the better restaurants at YVR, the menu features BC seafood (including the popular fish tacos), as well as other hot entrees such as burgers, steak, and breakfasts. [After security, Gate C45]

Jetside Bar: Also Fairmont Hotel Vancouver Airport, this elegant bar will make you forget you're even at an airport, except for the floor to ceiling views of the runways below. Craft beer, BC wine, and Fairmont cocktails await. Pricier than average, but then again, this is Fairmont. [Directly above US departures]

White Spot: An oldie but goodie, White Spot has been a BC institution since 1928, famous for their Triple "O" burger served on a toasted bun with a sliced dill pickle, fries, and coleslaw. It's not fancy, but that's precisely the charm. The menu has evolved over the decades to feature family-friendly comfort food, including the children's Pirate Pak - a meal served in a paper pirate ship. [Domestic, before security, level 3]

Vino Volo: A newcomer to YVR, this upscale wine bar chain will allow you to imbibe on BC and international wines by the glass or by tasting flight, while sampling regional BC cuisine as share plates or entrees. [International before security: Arrivals, Level 2, USA terminal Gate E83]

Palomino Bar & Grill: A more casual version of Milestones, a Canadian casual fine dining chain. A good place for brunch before flight, and a decent menu for lunch and dinner, revolving around North American staples: burgers, salads, pasta, steak, and seafood. [Gate A2]

Starbucks: Vancouver's been addicted to Starbucks since 1987, and its love affair persists even here at YVR. [Before security: Level 3, after security: Gate A2, Gate 33]

A&W: Ice-cold root beer, burgers, and onion rings. It doesn't get better than this combo. [Before security, level 3]

Brioche Dorée: A bakery café in the airport serving quiche, bagels, croissants, fruit cups, and sandwiches on crusty baguettes. Though it's not authentically French, it's above average fare for YVR. [Gate 26]

Camden Food Co.: Organic and fair-trade cuisine for the ethical traveler. Deli sandwiches, soups, salads, wraps, and baked goods are there to tempt you. [Gate C43]

Green Bean Café: Fresh sandwiches with interesting toppings (ex: cheese with roast fennel, apple and red onion) and breakfast samosas are just some of what you can find at this domestic terminal café. They also sell beer. [Gate B20]

Jugo Juice: Huge fruit smoothies in a variety of combos, including protein-enriched smoothies and wheatgrass shots. Although they also sell light meals (grilled wraps and paninis), the smoothies won't disappoint. [Before security, level 3]

Rice Tales: Healthy Asian cuisine made to order – rice bowls, noodles, curries, sushi, as well as gluten free options. Ideal for those not in a rush – the food prep takes time. [Gate C43]

Subway: This is your standard Subway with six inch/foot long sandwiches, as well as salads and wraps. [Before security, level 3]

Hanami: Vancouver is famous for its Japanese restaurants, but this isn't one of them. [Before security: Level 3]

Koho Restaurant and Bar: A casual full service restaurant and bar, with beer on tap. Food is unremarkable but offers a variety of options, from Thai curries and mussels, to nachos and chicken wings. [Before security: Level 3]

A&W: Ice-cold root beer, burgers, and onion rings. It doesn't get better than this combo. [D67]

Burger King: You'd think that Burger Kings would be fairly common around Vancouver, but you'd be wrong. But here it exists in all its Whopper glory for those craving the famed flame-grilled burger. [D75]

Toshi Teppanyaki: Made to order teppanyaki dishes, such as yakisoba, teriyaki, and udon. They also serve sushi. [Before security: Level 3]

Starbucks: One of the best people watching locations at all of YVR, conveniently located next to the Bill Reid statue. This Starbucks makes for the perfect meeting spot. [Gate E86]

Tim Hortons: Cheap and ubiquitous, Tim Horton's is the first place Canadian politicians head when they pretend they want to know what's going on with the average Canadian. For all others, a box of Timbits will do. [Gate E84]

Orange Julius: There's something satisfying about sucking back an icy orange smoothie from Orange Julius after a long flight. [Gate E87]

Galiano Café: A simple family-run cafe serving hot breakfasts, muffins, homemade soups, salads, made to order sandwiches, as well as espresso and yes, beer. This is your only dining option inside the South Terminal. [Before security at the food court]

The Vancouver International Airport is technically located in Richmond, a city often quoted as having the best Chinese food outside of China. Craving authentic Taiwanese, Cantonese, or Shanghainese cuisine? It's literally only minutes away. If you've got time then take a 15-minute drive south, you've got the historic village of Steveston, famous for its fish & chips and seafood restaurants with views of Canada's largest fishing fleet.

1) The Flying Beaver Bar & Grill
Located along the Fraser River across the street from the South Terminal, this riverfront pub shares the same building as the Harbour Air seaplane terminal. Come here for the novelty of the location, although the pub food (burgers, salads, nachos, chicken wings) isn't bad. Their patio, however, is a standout; where else can you nosh on pub food while watching the seaplanes land and take off?

2) Sea Harbour Seafood Restaurant
Want to taste Vancouver's famed Chinese food without straying too far from the airport? Hop on the Canada Line three stops to Bridgeport Station. There, at the base of the station, is Sea Harbour Seafood Restaurant, best known for their dim sum and seafood specialties. A higher end Chinese restaurant, their dim sum won the gold prize at the 2013 Vancouver Chinese Restaurant Awards.

4) Shanghai River
For upscale Shanghainese, you can't do much better than Shanghai River. The Xiao Long Bao is considered the best in the city, and its location near the Brighouse Canada Line station means easy access to and from the airport.

5) Fisherman's Terrace Seafood Restaurant
Located in Aberdeen Centre, one of Richmond's many Asian shopping centres, Fisherman's Terrace will give you an authentic taste of Hong Kong style dim sum. Chaotic and busy, it's best not to be in a rush when dining here. Its location at the Aberdeen Canada Line station does mean it's extremely convenient to get to from the airport.