"Any good restaurant and bar manager shouldn't just be behind the bar," Robert "Buck" Friend states matter of factly. In explaining his perspective on effective service, he says, "You should be able to do any other job in the restaurant, be able to leave the bar at any given point and work any position front of house." Interview by Joie Alvaro Kent. 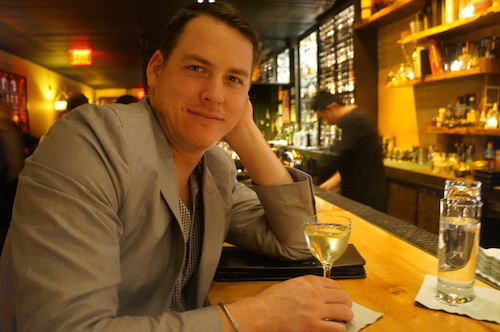 The Young Gun semi-finalist was an 18-year-old student when he began working as a busboy at Omeros Bros Seafood Restaurant on Australia's Gold Coast. He quickly rose through the ranks, earning a promotion to bartender/server within six months and part-time maitre d' shortly thereafter. Five years at this classic award-winning restaurant and a wealth of experience later, he left behind the familiarity of home behind to stretch his wings in Vancouver.

Friend's introduction to Vancouver's restaurant scene was a stint behind the wood at Revel Room where he relished the experience of working alongside two of the city's noted barmen, Robert "H" Holl-Allen and Robyn Gray. After 12 months of juggling the Gastown hotspot's fast-paced cocktail demands, he shifted focus to become bar manager at Angus An's much-lauded Maenam. Fast forward another year, when Friend received the offer to join the opening team at Bambudda. It was an offer he couldn't pass up. Now, at age 27, he's been restaurant manager and head of the bar program for 10 months. Below, he reflects on how quickly his career has developed over nine short years.

How long have you worked in the restaurant industry?
I started at a busboy at Omeros Bros in Queensland when I was 18. It was originally just a part-time position while I worked my way through a four-year program in Hotel Management and International Business at Griffith University. But I ended up staying with them for five years until I left for Canada.

What motivated you to stick with front of house as a career?
When laying out my choices for university, three out of my four picks were hospitality based. For me, it's all about the connection with people and making them happy. I work in hospitality to represent it in the true sense of the word, to give guests an enjoyable and memorable restaurant experience. 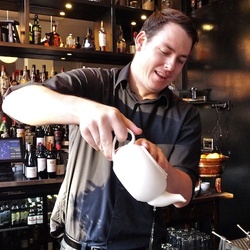 During your tenure at Omeros Bros, what had the most significant impact on how you approach restaurant management?
It's an award-winning seafood restaurant in Australia, and their classic philosophy focuses squarely on the customer. We bent over backwards to accommodate each and every person in the best way that we possibly could. That's still how I approach customer service today, no matter who my guests are and what's happening around me. It's all about hospitality and about trying to do the best for each diner that I can. And I believe that a good restaurant manager should have first-hand experience with every aspect of the restaurant—I even took a turn on the line in the kitchen to give me a fully rounded understanding of how it runs.

And what, in particular, brought you to Canada?
At 23 years old, there wasn't much more that I could achieve at Omeros Bros. It wasn't as if they were going to hand me the keys to a top-notch restaurant. So I decided to look abroad and acquire skills that I could eventually bring back home with me one day. Tales of the Cocktail's stop in Vancouver caught my eye. As a self-taught bartender, I was drawn to the developing cocktail scene here.

You were a key part of opening Bambudda at quite a young age. How does it feel to be such a fundamental part of shaping a new restaurant?
It's been unbelievable. Not many people my age have such a significant opportunity come their way, and I worked together with owner Ray Loy on everything from designing the bar and picking tables and chairs to tweaking the opening menu and laying out the restaurant space. It was pretty special to tailor Bambudda's bar specifically to my needs.

What's the primary difference between Omeros Bros and Bambudda?
Omeros Brothers is kind of like the Joe Fortes of the Gold Coast. It's been family owned and operated for about 28 years, the type of classic white-tablecloth restaurant where people would gather for special occasions. The first cocktail I ever learned to make there was a Grasshopper. And now I'm using an aquarium pump behind the bar. I have the freedom to play around and experiment with traditional cocktail recipes. Here at Bambudda, we generally have more fun with our customers—that's the expectation. It's pretty unpretentious bartending with a broader sense of adventure, and I love it.

How have you put your personal stamp on Bambudda's cocktail list?
I've been fortunate enough to make own my liqueurs, syrups, and infusions: stuff like green tea liqueur, a whole range of 'cellos, apricot brandy. And there's Bambudda's house aromatic bitters that includes angelica root, cassia bark, kaffir lime leaf. We've all concocted our own creations as bartenders, but here I'm given the time and creative space to focus on my ingredients.

Any future plans in the works?
I'm from a small town called Gattons, two-and-a-half hours north of Brisbane, and I'd rather raise my family in Australia. I haven't experienced the rest of Canada yet, but I do believe that Australia offers a better way of life—all the benefits of free health care and subsidized education, but the pay's better. Because I'm Australian, there are more opportunities for me there. But I'm in no rush. For now, I'm in Vancouver.
· Bambudda [Official Site]
· All Previous Eater Young Guns Coverage [EVAN]