Share All sharing options for: Your Guide to Shirakawa's $100 Kuroge Wagyu Steak

Gastown's Shirakawa restaurant is the only one of its kind in Vancouver to serve authentic Japanese wagyu beef. A highly prized - and highly priced - luxury dish, we spoke to Shirakawa's Takuya Motohashi to find out more. 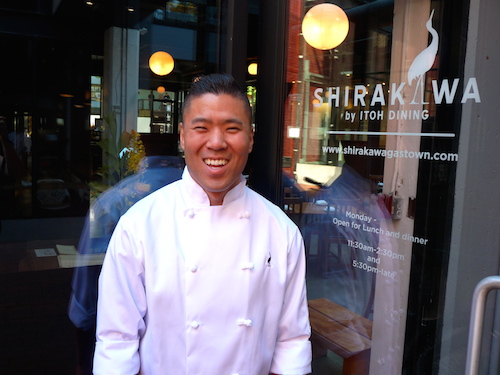 Why does wagyu have this reputation?
Because it's like no other. Our beef comes from the Miyazaki Prefecture [Editor's note: the area is the 2nd largest producer of Japanese Black cattle (Kuroge Washu), and only the highest quality cattle from this region can be dubbed "Miyazakigyu". In 2007, this class of cow won the "Champion Cow" at the Wagyu Olympics]. People have heard of Kobe beef from Kobe, that's like an appellation, but our beef is special because it comes from a relaxing environment.

How do they treat the cattle?
Miyazaki is not a big city; it's got a feeling like Hawaii, you get off the plane and it's super-warm with palm trees and there's the ocean. Everything is in the open and green. It's not technically city-raised beef, it has a relaxing environment, the air that the cattle breathe, the water that they drink, the fruit that they eat it's all the best. Mangos, for instance go for $50 a piece there, they are super-sweet, super-ripe, they get wrapped up so they don't get too much sun, they really baby them! They feed off things like that to give the beef a rich flavour.

What about the rumours that the cattle get massages?
The massage is true! Classical music is played to them to create a stress-free environment as well. They get a lot less stress than we have every day. Cows have it good over there. The Japanese take a lot of pride in what they do and they are perfectionists. 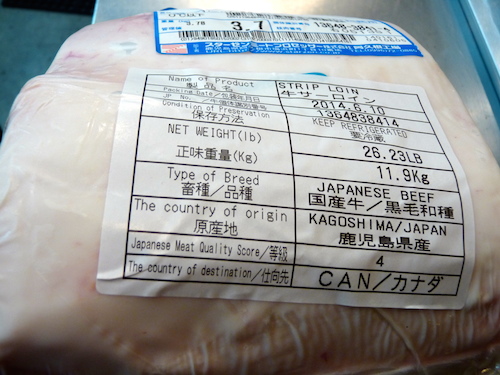 What's the difference between your beef and the Kobe?
The only difference is that it comes from a different region. If you look at Kobe beef, it looks like tenderloin, the fat marbling is a lot finer so it's apparent but the lines are fine. With our beef it's more defined. There's way more marbling than meat almost; we don't cook it any more than medium-rare and when you chew it the more fat just keeps gushing and squirting out. It is something else. People say it's like butter, but this meat really is. It's very different from the North American raised stuff which is not treated in the same fashion.

So yours comes direct from Japan?
Yes, we get it from the supplier who supplies all our restaurants in Japan. It's 100% the real deal.

But it's still seems so expensive, $100 for a 4oz steak!
It is very expensive; if there was a bigger demand for it, the price would drop but to specialise in it, it's tough right now, we don't mind taking a hit on it because we want people to try it!

You're taking a hit at $60 for 2oz?
Yes, we have to clean off the fat, once we've trimmed everything away so you get as much of that red meat as possible it really makes margins tough.

But people are buying it?
Oh yes. We get through around 5 kilos in a week, that's around 20-30 portions of the 2oz serving. It's still pretty niche but people are coming back to have more. 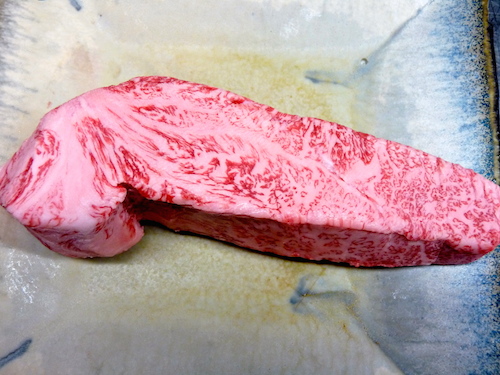 So we need to save up if we want to experience this?
We do it in a sushi form which is more accessible. It's a nigiri style with wagyu on top, we have a Japanese style poached egg with truffle oil and a house-made sweet soy and you dip the sushi in that. It's a one-bit thing for $9.50, but you get to try it and see what it's like.

What's the most anyone's eaten in one sitting?
People come in and say, I want 8oz. It's good and it's great and I'm sure you understand this meat, but you don't want to eat that much; it's so rich. I had a gentleman come in with his girlfriend and they wanted 8oz each, I gave it to them in the end but I had to ask them five times if they were sure. They got an enormous amount of appetisers and sushi beforehand too, and I was trying to say, 'I'm not here to insult anyone - I'm sure you have the money but it's a luxury to have it and to try it - 4oz is probably good'. But that's what they wanted and they spent $400 just on steak.

Finally, what's most people's reaction?
"Wow." I get comments that it's very different from North American-raised stuff and people say "you can tell that it's from Japan." I don't know what that means exactly, but I'm just assuming it's a good thing because I've had North American-raised kobe beef and you just can't even compare it.
· Shirakawa [Official Site]
· All Shirakawa Coverage [EVAN]
· All The Five Days of Meat Coverage [EVAN]