Share All sharing options for: In My Kitchen, Oasis and Phil Collins Are Outright Banned: Los Cuervos's Gilles L´Heureux

Want to see someone get fired up? Ask them about their taste in food or music. So why not combine the two? In a regular feature we go behind the scenes to find out what chefs in the city listen to before and after their restaurants open for service. This week, we head up Kingsway to talk to Gilles L´Heureux, chef-owner of Eater 38 newcomer, Los Cuervos to find out what music makes one of the city's favourite taco joints tick. For your listening pleasure while you read check out Gilles' "go-to for body movement, Redtenbacher's Funkestra and their song The Theme from 'Diamond Tiger"' 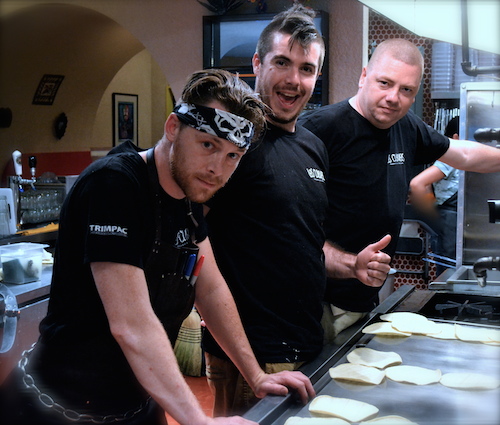 At Los Cuervos we listen to anything and everything before and after service (Frank Zappa, Molotov, The Roots, De La Soul, Johnny Cash, Metallica, Daft Punk, Five Alarm Funk, AC-DC, Tribe Called Quest, Budos Band and more). During service of course we have the house play lists that are full of salsa music and the like. We can get pretty tired of hearing the same thing over and over so as soon as the restaurant is empty the music changes.

We let anyone play music, although as the chef there are some groups that are outright banned (Phil Collins, Rolling Stones, Oasis etc). I have one cook who is a metal head, another that is into ska and punk. I let anyone play what they like whenever we are not open, however if we are behind on prep I will play something with a driving beat and no lyrics to get bodies moving.
· Los Cuervos [Official Site]
· All Previous Los Cuervos Coverage [EVAN]
· All Previous This Is My Jam [EVAN]