Vancouver is home to a lot of restaurants and bars, but there are tons of hidden gems that the majority of Vancouverites aren't unearthing. To help guide us to these potential discoveries, we've enlisted some of our city's food players to share their recommendations for a feature dubbed Dining Confidential. This week, Four Seasons Yew Seafood pastry chef, Bruno Feldeisen, shares his favourite off-the-beaten-path North Van restaurant.
Know a chef who wants to share some top dining spots? The tipline is open. 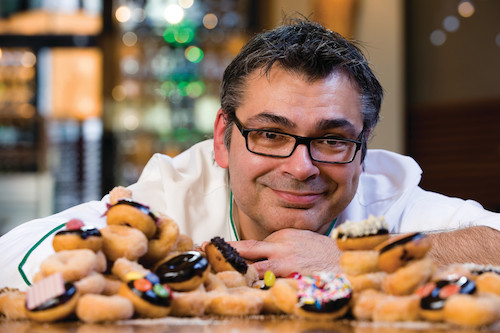 Where do you like to eat?
The Arms Reach Bistro, It's really French, but, you know - not really. It's so peaceful as it's right on Deep Cove.

What do you like about it?
The first time we went I was with a friend and we'd been walking by the cove, we walked by and you just imagine that somewhere like that: it'll be a tourist trap, not good at all. But we were hungry so we went because the patio looked so peaceful. We ordered the humous and it came with spices on top and I loved it. It's really restful there and I find it so soothing. You feel in tune with the surroundings there; you sit down, look at the cove and just relax.

What's special there?
I'm always sceptical about restaurants in those kinds of areas - you think they'll have cheap food and bad service - they cater for people they'll never see again! But I remember being so surprised at how good the food was: the humous was drenched in olive oil and then I had a delicious soup too, and we discovered that it's a really great chef with good management behind it all. We need more places like this in Vancouver, independent places: I live in Coal Harbour and I'd love a great neighbourhood restaurant like this.
· YEW Seafood Four Seasons [Official Site]
· All Previous Dining Confidentials [EVAN]
· All Previous Bruno Feldeisen Coverage [EVAN]
· Arms Reach Bistro [Official Site]