On July 1st Four Seasons YEW Seafood Restaurant and Bar's chef Ned Bell set off to cycle across Canada. He'll be keeping us posted with his journey from the road for the full eleven weeks. Here now, the latest of his diary entries. 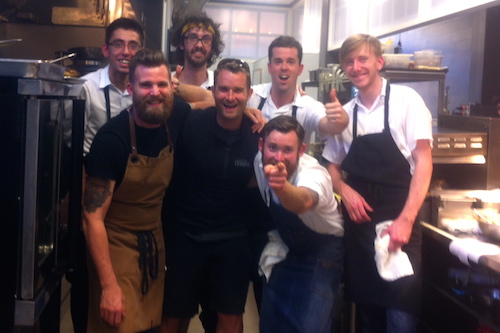 This past week was full of friends & fun, as we rolled out of Manitoba towards Saskatchewan we knew we were in for some prairie winds, farm lands and flat roads as far as the eyes could see. The journey has been eight weeks of hills, twists, turns and more hills but this past week that all changed. Almost immediately as we crossed the provincial border into Saskatoon the prairie winds hit us head on: they blow every which way, just never at your back.

As we made our way from Winnipeg to Regina the weather turned, wet and windy, it reminded me of the West Coast. We trudged on; wind has been a constant companion on this journey, but add in the swirling rain and it gets to you - your brain, your feet, face, your butt - soggy. But it makes the destinations all the more enjoyable when you arrive. 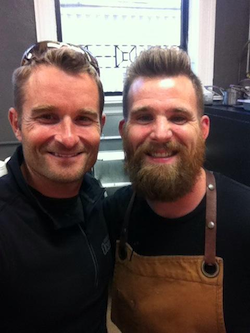 The Regina event was a huge hit, chef Jonathon Thauberger, at Crave Restaurant is an old friend from the Okanagan, we have worked together for years and I knew he has the support of his community. The arts in Regina, and Saskatoon are very important and play a huge role in the culture there - Jonathon's dad is a painter and an Order of Canada recipient for his works.

The turnout for the event was fantastic, full of artists and locals all passionate about the messages of Chefs for Oceans, after all, healthy lakes, oceans and rivers 'connect' in this land-locked province, with amazing farms, farmers, aquaculture and agriculture running deep in the region.

After Regina we made out way towards Saskatoon and a special event at one of my favourite chef's new spots. Dale Mackay and his incredible restaurant Ayden Kitchen & Bar. His team there rocks: Chris Cho, Nathan, Tara, all Vancouver transplants who have opened Ayden to critical acclaim. Dale has a winner on his hands. Love to see it thriving in his hometown. Saskatoon reminds me of Calgary, booming and with a very bright future ahead.

The event for CFO at Ayden was sold out - packed in fact - and the community there soaked it all in. One of the things I have been inspired by on this prairie province leg of the trip is that regardless of being land-locked, the middle of the country is just as engaged and just as informed as the coastal and big city supporters. All be it for different reasons or with different concerns, healthy lakes, oceans and rivers makes sense to everyone coast to coast to coast.

Seafood is on our plates across the country, and where it comes from, how it's caught or farmed, when, and who catches it matters to everyone we have touched.
Today we made it to Llyodminster, tomorrow I cross over the border into Alberta and on towards Edmonton. A few km closer to the Rocky Mountains. More hills, more rain, but maybe less wind. :)
Follow Ned's Journey at #chefsforoceans and via @Nedbell on Twitter. See you on the road.
· Chefs for Oceans. [Official Site]
· All Ned Bell Coverage [EVAN]
· All Chefs for Oceans Coverage [EVAN]